Tonight’s tasting is for a special release from Moonshrimp Brewing! It’s called the Hazy White IPA and it’s an unfiltered IPA brewed with orange peel and coriander. This Hazy is packaged in 22 ounce bottles and I was able to buy it at my local Market of Choice. (Thanks for being so awesome guys!) 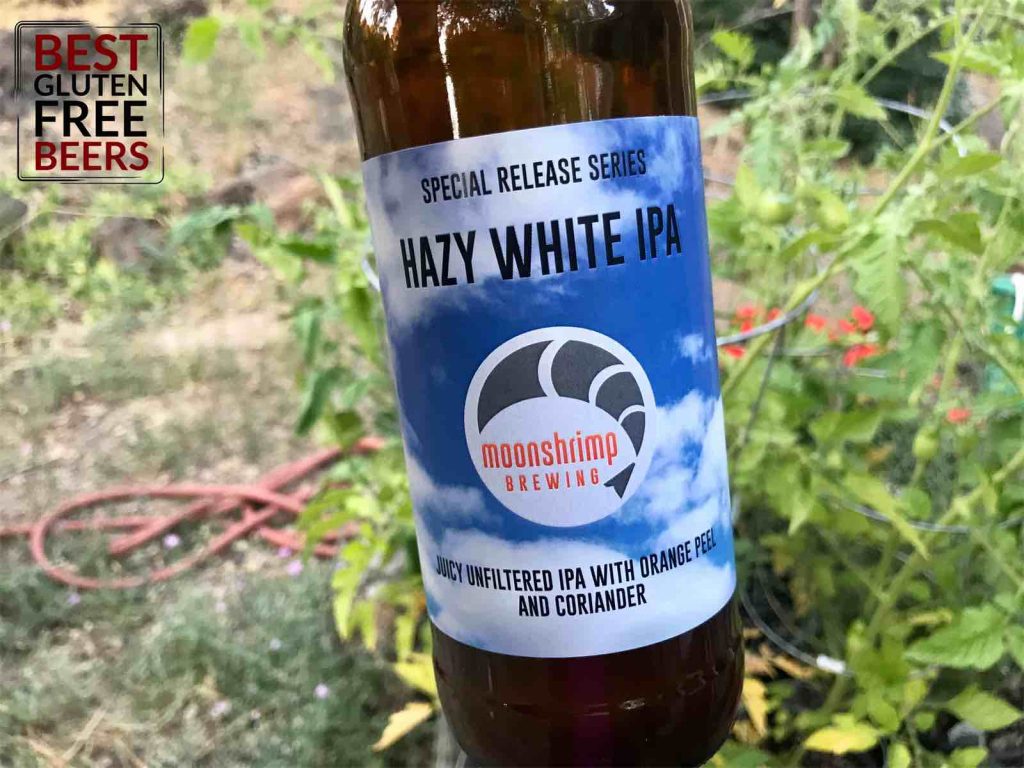 By the way, when was the last time you went into a local natural food store and asked the beer buyer to order what you want to buy? Of course, they don’t have to say yes, and maybe it’s out of their reach…BUT why wouldn’t they order the beer you want when you ask? That’s their entire job in a nutshell. Order beer that customers will buy. Do them a favor and tell them which beers you’ll give them money for! (It works.)

Ok. Back to this Hazy White IPA. I can also guarantee you that this beer is safe for even the most sensitive of Celiacs. It’s brewed in a 100% dedicated gluten free facility that ALSO happens to be 100% oat free. Even gluten free oats are banned from this brewery. (The owner can’t tolerate GF oats.)

So drink up Celiacs! No need to fret about cross contamination here. 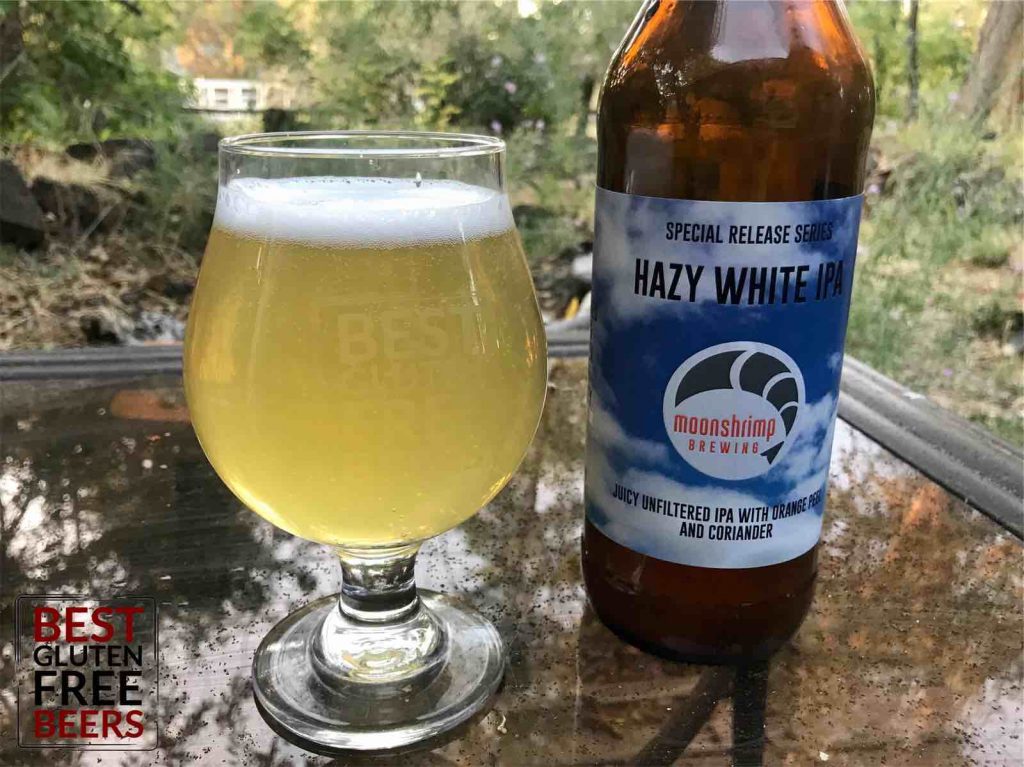 This Hazy White IPA by Moonshrimp Brewing pours with a cloudy straw yellow color that allows all shapes and light through. It poured with a nice head that bubbled away after a couple minutes. It stuck around longer than many Moonshrimp beers I’ve reviewed in the past though!

Side Note: If you like this nifty bottle jacket that I show in the beer pour video, check out their full product line here. I own two. One that fits 12 ounce bottles, and another that fits 22 ounce bombers (pictured in video). I highly recommend them for disguising and insulating your bottled beers. One hell of a product if you ask me! I also wrote a full review on them here.

The aroma of this Hazy White IPA is wonderful. I don’t detect as much coriander as I expected. But I do find flowery and lemon fruit notes with a texture on the nose that has me predicting bright and crisp qualities from the flavor profile. My first taste confirmed my thoughts about the tasting experience. This is a robustly fruity IPA that is crisp and refreshing.

The fruit qualities on the tongue sing with orange and lemon, and the malt body is a perfectly light–yet stable backbone for this hazy ale. The coriander is light and most easily detected at the back of the palate. It adds a faint warmness to the tasting experience. (In texture, not in temperature.)

I have to say, Moonshrimp does a great job with their citrus-forward seasonals. They have a way of capturing the freshness of the fruit flavors, creating bright profiles that would pair well with any warm weather day.

The carbonation level is lovely. The mouthfeel of this beer is on the lighter end for an IPA, as most Moonshrimp beers are. They tend to brew with raw grain versus malted grain, which creates a lightness in the body that some customers relate to cider.

This isn’t a very bitter IPA…it’s incredibly fruity and a bit sweet though. The sweetness isn’t overpowering while paired with the light body. In fact, it would be an incredible refreshing brew for a hot afternoon. 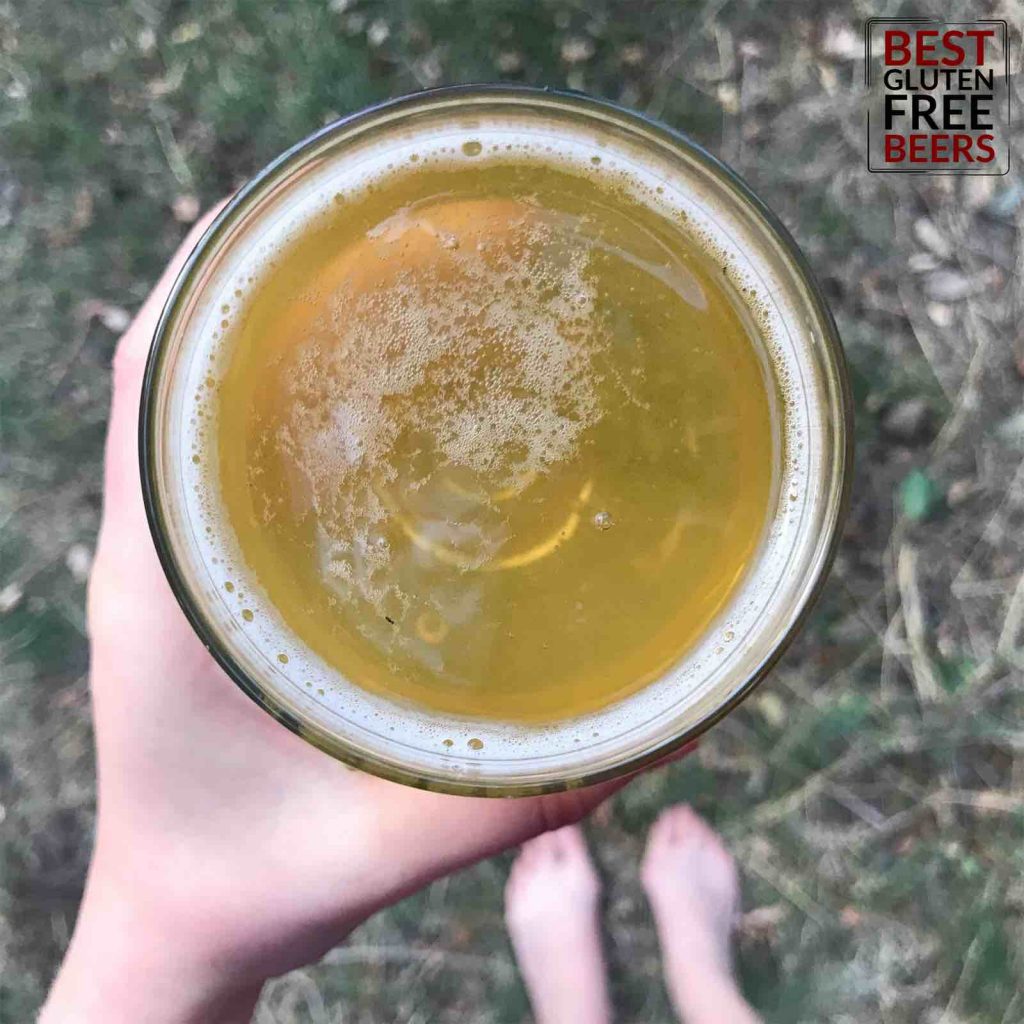 I would imagine that this beer is best enjoyed when freshly cold. The chilled nature allows those fruit flavors to shower you with brightness. Remember that it has a 5.5% ABV so 22 ounces of this Hazy White IPA will have you feeling nice. EDIT: When it did warm, it became way more juice-like. Largely because of how fruity the flavor profile is.

I would definitely buy this beer again. I might need to swing back by my local Market of Choice to snag another before they’re gone! If you’ve tried it, I’d love to hear what you thought. Feel free to leave me a comment at the end of this review. Cheers! 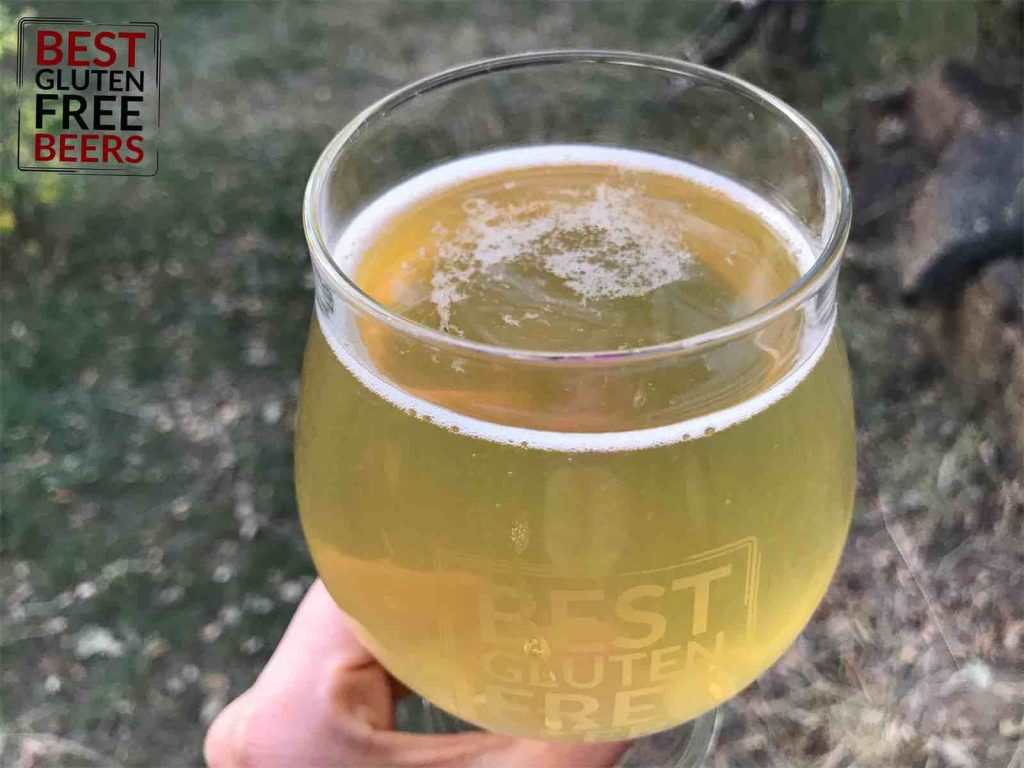