This isn’t the first time I’ve written about the Watchstander Stout by Ghostfish Brewing. But the recipe seems to change a bit each year so I keep re-reviewing it! This year, it so happens that the recipe was tweaked a LOT.  If you tried it in past seasons, this year’s brew may present a very new experience for you.

Stouts are viewed as difficult in the gluten free beer world. Not that it can’t be done–there are some phenomenal ones out there that are 100% gluten free form start to finish. But they are difficult. It takes effort to recreate the body that we expect in a dark beer with the lighter nature of alternative grains and extracts. But lucky for us, there are many breweries up to the challenge.

Tonight, we will taste Ghostfish Brewing’s only seasonal-release Stout, one of their darkest offerings. This beer is released annually in late early/late winter in 16 ounce cans (formerly in 22 ounce bottles). The Watchstander Stout won a gold medal at the 2015 Great American Beer Festival, a recognition earned by their older recipe. 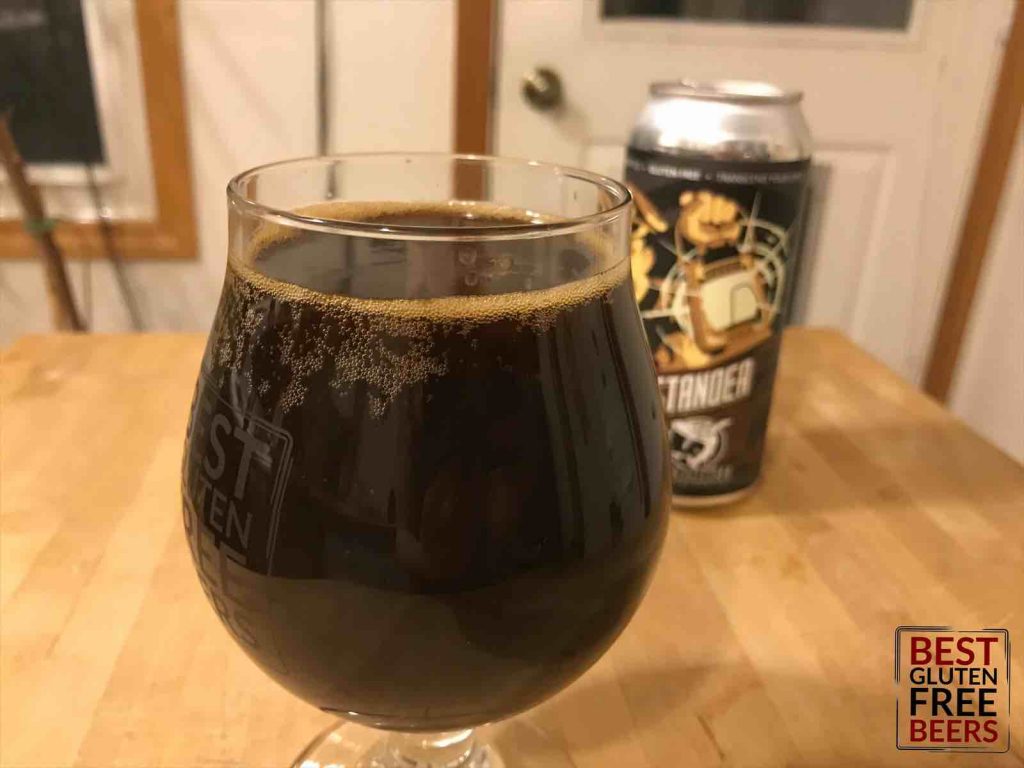 Watchstander Stout Gets A Makeover

I couldn’t be more excited to give a new Watchstander recipe a shot. This year Ghostfish Brewing decided to include gluten free oats, which I realize is controversial because some Celiacs can’t tolerate oats. (One of their employees even had to opt out this year because of it.) But as someone who enjoys a nice thick stout (and who can tolerate oats without issue) I welcome the attempt to bring more body to this stout through the use of oats.

In the past, a member of the Ghostfish team reached out to me during the planning stages and asked for my opinion on the subject of gluten free oats. I understood they were aiming to address concerns about mouthfeel and body of past year’s stouts, and knowing this, I supported their experiment with oats. BUT. I also advocated for the use of certified gluten free oats, which they DID decide to use. 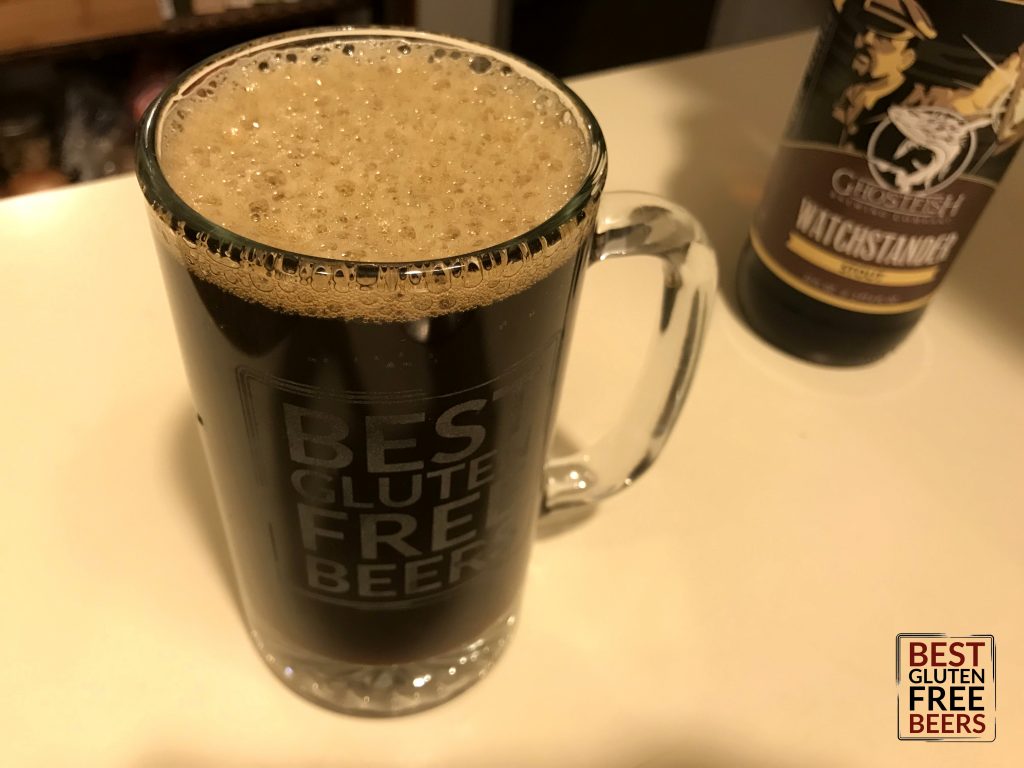 So know this. If you can’t tolerate oats whatsoever, you will need to opt out of tasting Watchstander Stout this year, but if you feel safe with certified GF oats, I recommend grabbing a few cans and telling me what you think. Particularly if you have tried past year’s brews and have an opinion on the recipe’s progress.

The 2019-2020 Watchstander Stout poured a bit denser than I remember it being in past years. The color it self seems to be a bit lighter, but it’s also much cloudier, giving it a thicker appearance and letting much less light through. Its color looks like that of light roast coffee…a soft, yet dark brown.

The Watchstander pours with a nice head this year, but once it bubbles away completely, the top of the beer has a flat look to it. If you look close though, you’ll notice a dark (almost invisible) fountain of bubbles continuing to rise through the center.

The nose is familiar on this one. Lots of coffee, lots of roasty malt, and some chocolate. Ghostfish says this stout presents with marshmallow flavors, and I would agree with that. (Although, to be fair, I haven’t had a marshmallow in a long freakin’ time.  Ha!)

The taste contains a wonderful explosion of chocolaty goodness. The taste is much heavier on the chocolate than the aroma, giving it a mocha-type flavor profile. The carbonation level is fantastic, giving this thick beer a little pep.

I have to say…I think this is my favorite Watchstander Stout release yet! I think Ghostfish really got it right this time. The body is thick and decadent. Mouthfeel is rich and full. The flavors balance well, and it has the perfect amount of bitterness to accompany the sweeter dessert notes. It’s a bit sweet, but not too sweet.

This beer is brewed on a base of millet, buckwheat, oats and rice. It has a 6.5% ABV and 30 IBU. Overall, I absolutely love the recipe they chose this year, and it has me hoping they stick with something similar for the next one.  Ghostfish has really stepped up their stout game, in my opinion. Would you agree? (Comment below!) It’s certainly moved up my preference list this year!

To read about the past Watchstander Stout releases and what I thought of them, continue on… 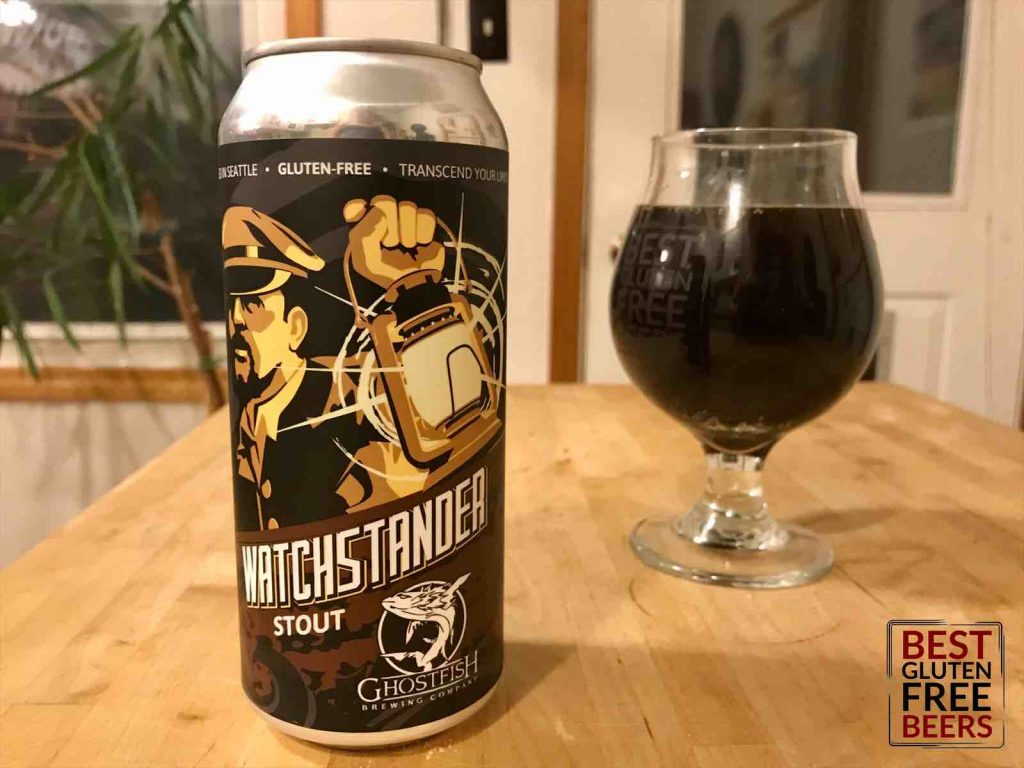 Right away during the pour I could notice a difference in the body. It poured slightly thicker and looked more dense in the glass than in past year’s. The beer is coffee colored, somewhere between milk and dark chocolate. A small amount of light passes through the glass, but not much.

I’ll be honest, I’ve been fighting off a cold this week (and so far winning), but my nose is not the clearest tonight and the aroma is pretty mild because of it. What I can lightly smell through my seasonal haze is a toasty chocolate quality with notes of coffee. 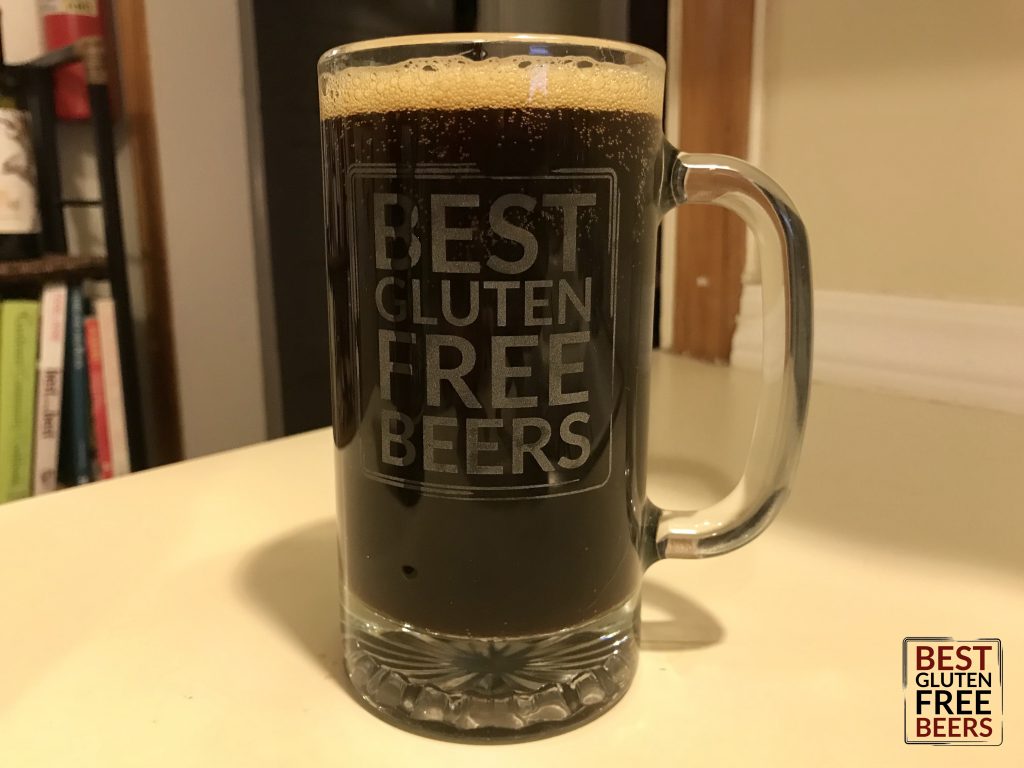 The head was decent, and had a warm hue to it. The bubbles were pretty big, not like those frothy heads that you see on dark beers a lot of the time. They didn’t linger too long, and there was no froth leftover. (Unlike last year’s.) But let’s jump ahead to the taste and body.

First of all. HUGE improvement from last year in my opinion. I think the oats have really helped thicken up the body quite a bit. The taste is smooth and roasty. A perfect blend between chocolate and coffee. In fact, it tastes a bit like s’mores to me!

I’ll be honest, I wouldn’t complain if next year’s body got even thicker, but this is very enjoyable and honestly, could be what they’re going for. It feels like it rests somewhere between an Irish and an American stout in terms of mouthfeel.

The carbonation level is good. The beer is a little–but not extremely–bitter. It has a 6.5% ABV and 30 IBU, which happens to be the same stats as last year. To anyone who tried this stout in the past, I am extra curious to hear what you think of the changes. I’m also open to hearing from those who didn’t like the addition of oats due to dietary restrictions.

I want to hear from all of you, and I will happily relay the feedback to the brewery. But for me personally, I’m giving this one a thumbs up. It’s certainly a strong step in the right direction. 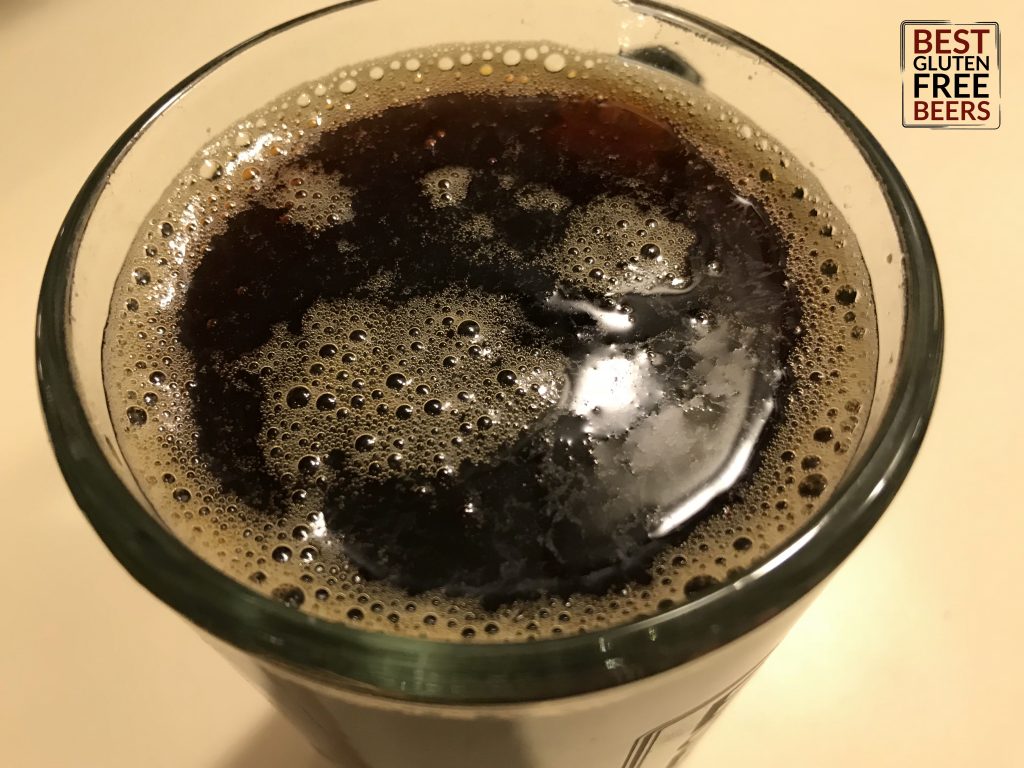 This beer foams beautifully, forming a very attractive head that lingers. It’s dark–but it’s not opaque, meaning you can see light and shapes through it when you hold it up. It smells of espresso and chocolate…a bittersweet combination that is the likely reason for my love of stouts.

The body is not quite as heavy as one would expect when looking at the color and the texture of the pour. It’s delightfully bitter–but not at all sharp, with subtle sweetness, and heavy notes of chocolate. This ale drinks incredibly smooth for a stout. It rides that line of dinner beer and dessert beer quite nicely, making it suitable for either. 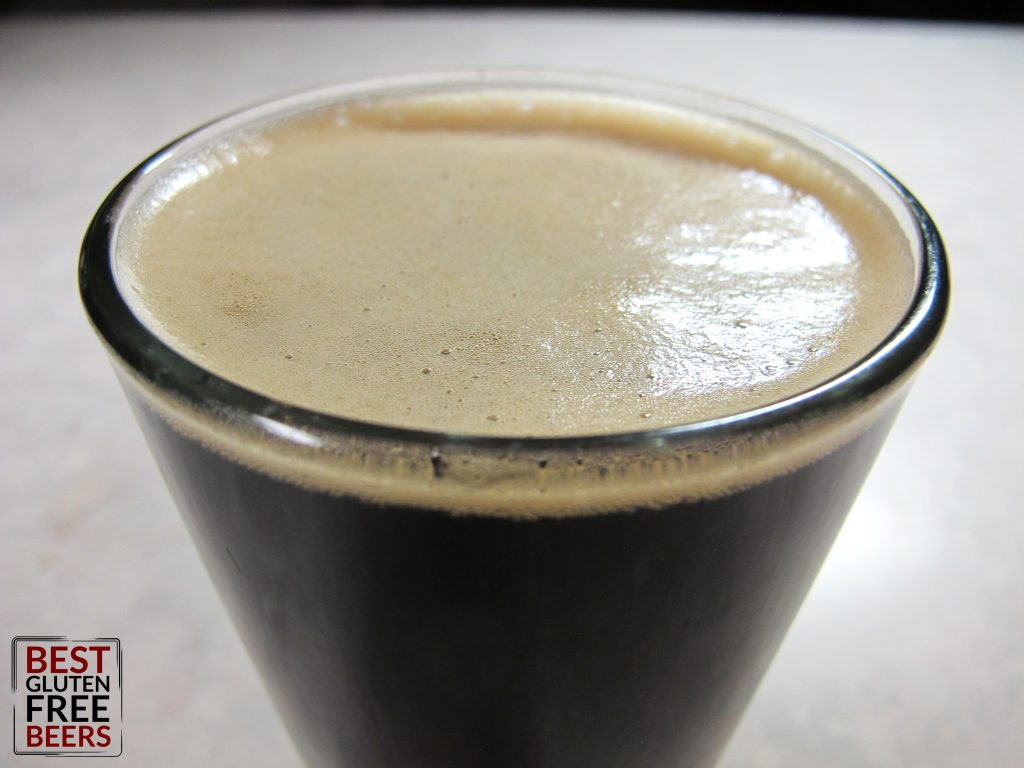 The Watchstander is brewed from malted millet, brown rice, and buckwheat. It holds a 6.5% ABV and 30 IBU. I do love the addition of buckwheat in my brews. I find it adds a smooth, earthy quality to gluten free ales.

Although I wouldn’t describe this beer as “heavy”, it does have a distinct velvety texture that makes it extremely easy-drinking. I think if I got to choose though, I would take a little more thickness in the body, although that would likely shift it into the after-dinner beer category for me…and I am enjoying it alongside my dinner at the moment. 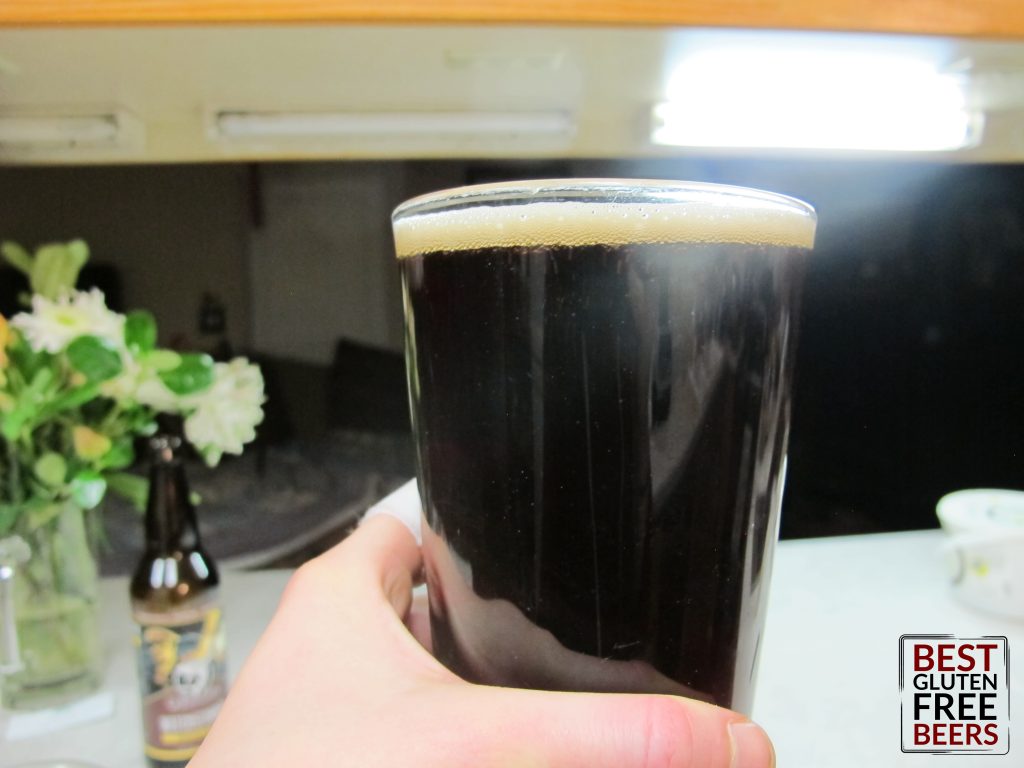 Who makes your favorite winter stout? Have you had the opportunity to try Ghostfish’s Watchstander? If so, I would love to hear what you thought of it. You can comment your thoughts below, or you can shoot me an email at bestglutenfreebeers@gmail.com.