On the tasting table in front of me tonight is not one, but two beers. Tonight we taste BOTH Ghostfish Brewing Fresh Hop IPAs. They were both released this fall a few weeks apart from one another, but they look exactly the same. The heavily anticipated Fresh Hop season is upon us and many breweries are rolling out their beers brewed with the 2018 harvest. 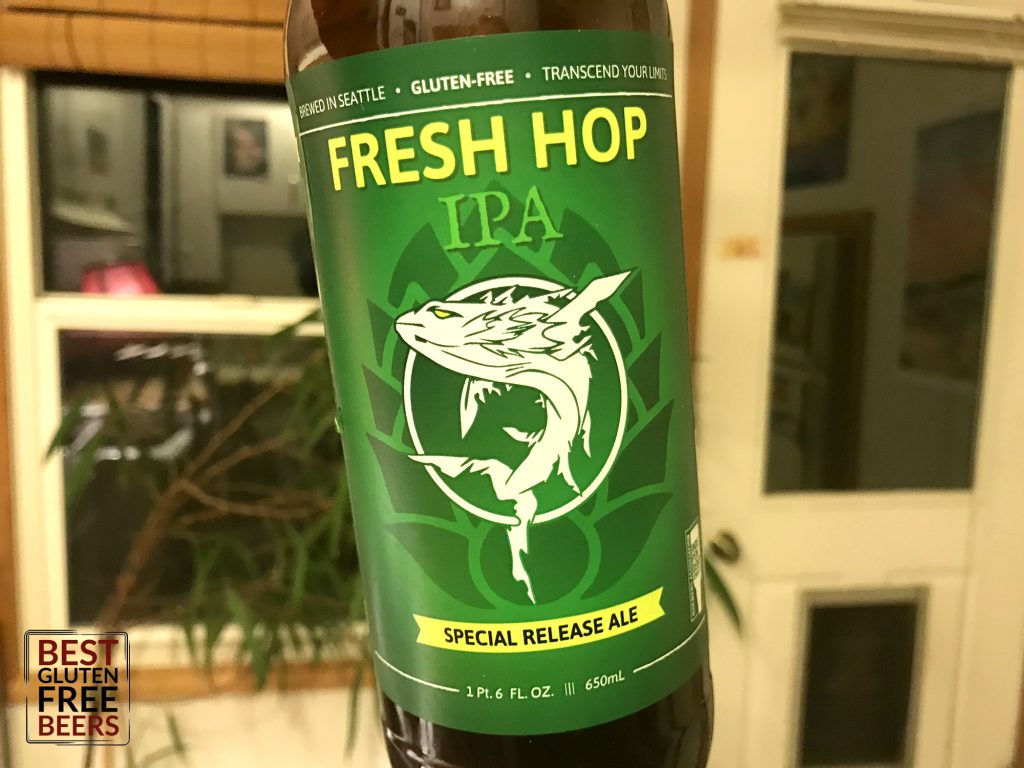 The Ghostfish Brewing Fresh Hop IPA is available in 22 oz. bottles for a relatively short window of distribution, and if you happen to live in the PNW, you might be able to find it on draft at a local taproom. If you see this beer on the shelf, I recommend you grab one before they’re all gone. Those of you who get your hands on one may be in for a fun surprise…

Ghostfish Brewing isn’t the only gluten free brewery to release two fresh hop beers in one season, but they are the only one I know of that has released two different varieties under the same (indistinguishable) label. The recipes are the same, but the hops used in each batch were completely different.

Batch #1 was brewed with 140 lbs. of Centennial hops, which tend to be harvested early in the fresh hop season. Batch #2 of Ghostfish’s Fresh Hop IPA was made with 140 lbs. of Simcoe hops. The two beers share the same base malt, ABV, and IBU.

In my hands I have both versions of Ghostfish’s 2018 Fresh Hop IPA, and I have decided to open them both and review them at the same time. We’ll call it the battle of the Ghostfish Fresh Hops, and either way–Ghostfish wins. Anyone want to venture a guess as to which is going to be my favorite?

I highly recommend checking out the beer pour for this one…it’s unique. Both IPAs share  the same color both are pretty clear. The Centennial hopped beer created a slightly thicker head, and it lingered longer. You can tell in the photos taken after the pour that despite having been poured first the Centennial’s head (left side) is significantly creamier than the head on the Simcoe Fresh Hop IPA.

The Fresh Hop’s aromas vary significantly due to the stark contrast in hop profile. The  Centennial smells characteristically citrusy and soft (remember I smell texture instead of flowers sometimes), while the Simcoe wafts bright earthy notes of pine forest and dew.

I’ve never compared a beer against itself before. This is kind of fun. Now for the taste. I went for the Centennial Fresh Hop IPA first. The Centennial tastes less citrusy than I expected, but so very floral. It also has a bitter kick that comes in waves after taking a drink. It hits strong at first, fades for a moment, and then returns with gumption. This IPA is bitter for a Fresh Hop beer (thanks Centennials) but its flavor experience is quite smooth.

As expected, the taste of the Simcoe Fresh Hop IPA is very different. I find it a little less bitter, and a bit more complex in the experience. It’s earthy but also forest fruity…berry-like I’d say. I will note that not cleansing the palate in between the brews left me with a mix of the Centennial’s citrus floral notes as well as the earthy notes of the Simcoe which, once blending on my palate…kind of tasted like soap. But a few more sips of the Simcoe and that interference was eradicated.

As previously mentioned, both beers share a 75 IBU and 7% ABV. While their grain bills and recipe may be the same, these two brews present significantly unique tasting experiences, and I hope if you live in Seattle you’ve taken the opportunity to explore both! The grain bill for these beers is a trio of malted millet, buckwheat and rice.

I suppose I promised to pick a favorite, huh…Ok. Well, ordinarily I think I would choose the more bitter of the beers, which to me is the Centennial Fresh Hop–BUT…I am going to with the Simcoe Fresh Hop IPA as my favorite. Maybe it’s because I’m a Pacific Northwest girl, but I love pine-forward IPAs. It always feels like I’m drinking an alpine forest…in a good way! So, Simcoe is the winner for me–but I’d love to know what yours is if you got your hands on both. Feel free to comment you thoughts below.

While my tasting preference leans slightly towards the Simcoe version, I must say…Centennial Fresh Hop takes the cake for head. SERIOUSLY. These beers have been poured for 30 minutes, and I’ve been drinking on them both equally. Despite being partially consumed, the Centennial still has a boisterous head boasting its dominance in the glass. Seriously, check out the photo comparison. I haven’t seen this degree of linger for a gluten free beer head in a LONG time…or ever? It’s seriously impressive.

I’m lucky enough to live in a town where I can buy Ghostfish beers, and there’s even a couple bars that keep it on tap. A bar 2 miles down the road even keeps a dedicated gluten free tap in their bar, and the other day I was excited to find the (Centennial) Fresh Hop IPA on tap there!

I was there to meet a friend who is by no means gluten free. I had her taste my beer (before drinking hers) and asked her what she thought. She loved it so much, when we got a second round, she switched to the GF Fresh Hop. I love it when GF beer wins over gluten-consumers. But it’s also good feedback to receive as a gluten free beer drinker (and blogger)…that the gluten free beer on the market these days CAN compete with its glutenous ancestors. I feel a sense of pride in the gluten free beer industry for leveling up so hard the past few years. Big props to the dedicated gluten free brewery pioneers that led the charge on reducing GF beer stigma. This is so fantastic for us gluten free consumers, because if bars/restaurants/stores can sell gluten free beer to ALL consumers (because it tastes good), then WE get way better access to GF products. Win, win.

So here’s a question. If I blind tested you, do you think you know your hops well enough to detect which version of the Fresh Hop IPA one you’re drinking? It would be great to have a room full of hop nerds right now for experimentation purposes. Let me know your answer in the comments below. :)