The Next Brewery Tour Teaser is Ready!

I am excited to announce that the Ground Breaker Brewing tour teaser is finally ready to share! If you recall, a couple months ago I took Best Gluten Free Beers on the road to visit 3 different dedicated gluten free breweries.

This tour spanned two states: Oregon and Washington. I made stops at Moonshrimp Brewing and Ground Breaker Brewing in Portland Oregon, and Ghostfish Brewing in Seattle Washington. Each and every stop was completely unique, but they all had something in common…a fiery passion for craft beer that is 100% gluten free–from start to finish. 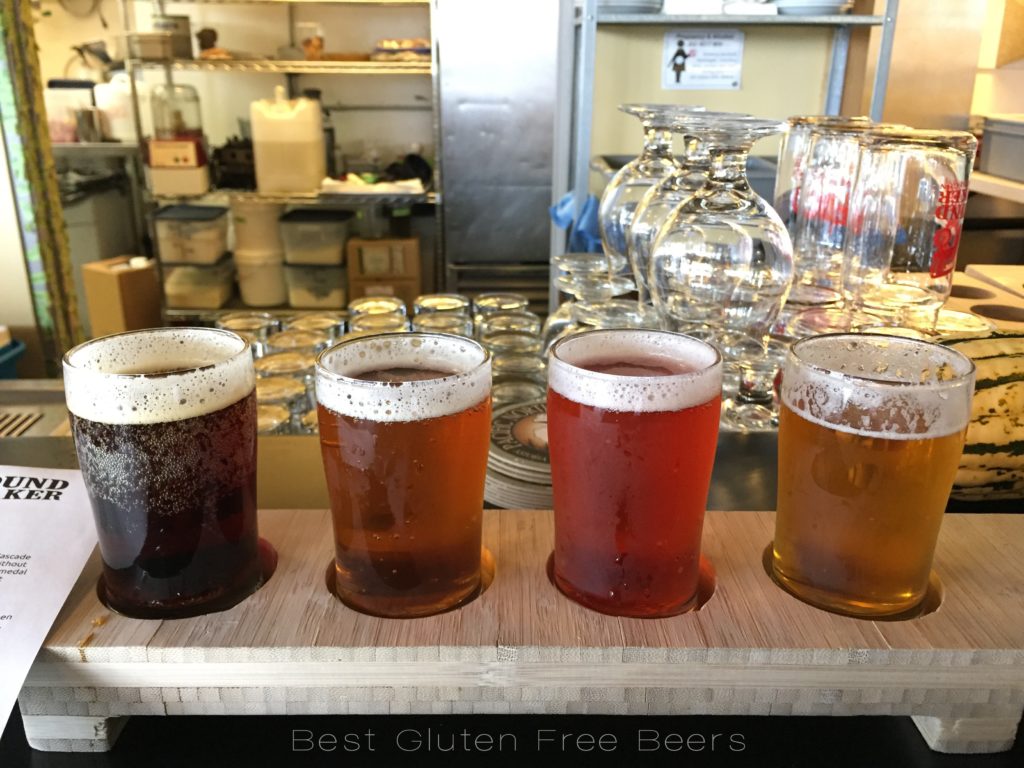 Another thing these three breweries had in common is that they were actually brewing beer during my visit, which allowed me to get behind-the-scenes with the camera for a special look at their brew process! The full brew tour will included detailed interviews with the brewery founders and brewmasters, in addition to a full tour of their facility.

I am still hard-at-work crunching footage for the full brew tours–but I’ve created a series of teasers to wet your appetite in the meantime. If you follow this blog already, you may have noticed I posted the Moonshrimp Brewing teaser a few weeks back. I’ve also already posted a detailed taproom review for Ground Breaker Brewing, which you can read here. (If you want to read all about the food I ate, the beer I drank, and the vibe of the Ground Breaker taproom, this review is for you!)

Ground Breaker was my last stop on the tour. I had plans to meet them at the brewery at 9am. Unfortunately I woke up to a flat tire in Portland, which made me a bit tardy, but luckily Ground Breaker had a tire shop just 7 blocks away.

This brewery is special to me. Before I found Ground Breaker, I had given up on beer. I had been gluten free for a couple years already, and up to this point, every single gluten free beer I tried was HORRIBLE. Not good beer. I’m sure you can relate.

I even home-brewed a batch of gluten free beer in my kitchen–just to see what all the struggle was about. My beer turned out great, even though the ingredients were a shot in the dark and my brew process was…primitive, to say the least. This led me to higher levels of frustrations with the gluten free beer market at the time, as I now knew that good gluten free beer was possible–and still, these breweries were choosing to brew crappy beer. Lame.

Unfortunately, much of the United States is still living in the “dark ages” of gluten free beer, meaning their access to high-quality gluten free craft beer is limited or non-existent. If they do have access, it’s often to beers that are not actually gluten free–but gluten reduced using an enzyme.

When I found Ground Breaker, everything changed for me. They were still called Harvester Brewing Company at the time, a name they were forced to change due to a branding conflict with another company. When I had my first taste of Ground Breaker, I almost cried. It tasted like real beer. The kind of beer I remembered drinking before I went gluten free. Beer with flavor. Beer with body. Beer with character.

This is why Ground Breaker holds a special place in my heart. They were the first brewery that brought beer back into my life after learning I would have to avoid gluten for the rest of my days.

Stand by for more!

The full tour is still in the editing phase, but I have a little something to hold you over in the meantime. The Ground Breaker Brewing teaser is finally ready and you can watch it below. For those of you who emailed me questions for the breweries…I asked them all! Your answers will be scattered throughout the brew tour features, which will be released as soon as I’m done crunching all the footage.

In the meantime, pop open a brew and kick back to watch the teasers…and don’t forget there’s a detailed taproom review of Ground Breaker on the blog too. There is still one more teaser to be released for Ghostfish Brewing as well, but I have already published their taproom review if you want to read up and see photos. (I got to sit at a bar, drink delicious beer, AND eat Fish n’ Chips for the first time since going gluten free!)

Enjoy this behind-the-scenes look at Ground Breaker Brewing, and be sure to get on the waiting list to be notified when the full brew tours are ready. Cheers!