Here’s an alternative you may not have considered… 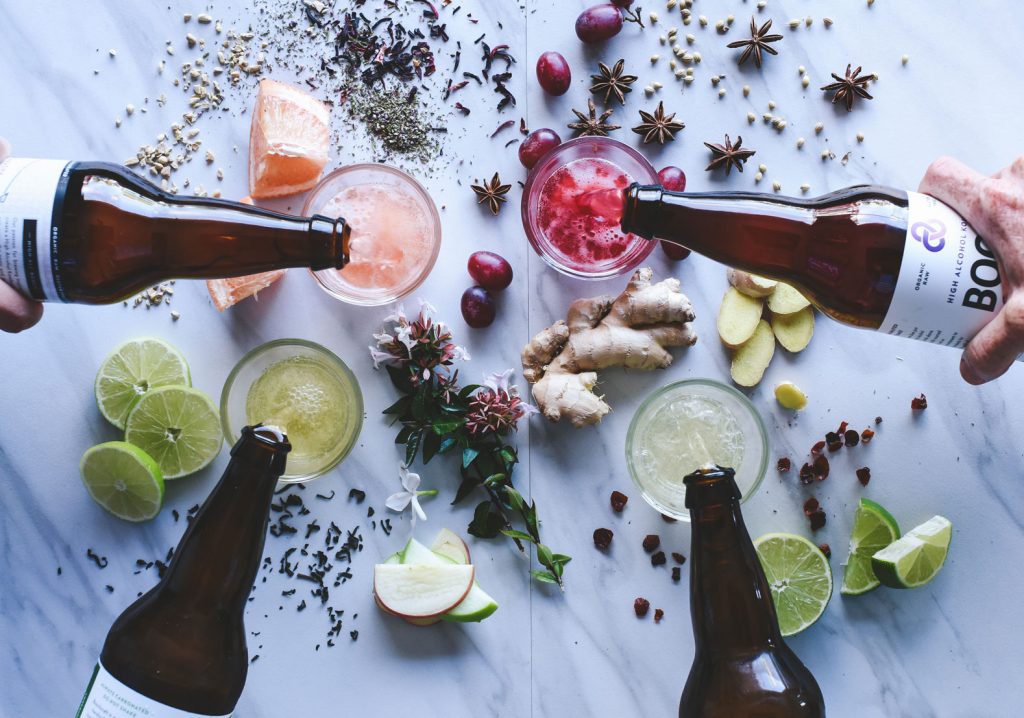 Best Gluten Free Beers receives a lot of emails from beer seekers who can’t seem to locate a single gluten free beer option in their hometown. Let alone a good one. My first piece of advice is to KEEP requesting it from your local retailers! Squeaky wheel gets the oil, you know?

But in the meantime, if you’re looking for a fizzy alternative that isn’t a cocktail, you can check out this hard kombucha brewed by Boochcraft. I don’t know if you’re on the kombucha wagon yet, but I’m a big fan. I’ve been making this stuff at home for years, but it’s recently become a bit of a trend and is now accessible all over the world.

Kombucha naturally possesses a very small level of alcohol due to the fermented quality of the tea, but this company seems to have taken it one step further in the fermentation process. Their hard kombuchas reach up to 7% ABV, so they’ll pack a buzz similar to a higher-ranged ABV beer.

The following was written by Adam Hiner, CMO of Boochcraft.

Boochcraft as a Beer Alternative

You might have noticed the increasing amount of gluten free products on the market, and this isn’t just the latest trend, despite what some people may say. An estimated 1 in 100 people worldwide suffer from an autoimmune disorder called Celiac Disease. This disease occurs in genetically predisposed people where the consumption of gluten leads to damage in the small intestine and can cause long term health complications. 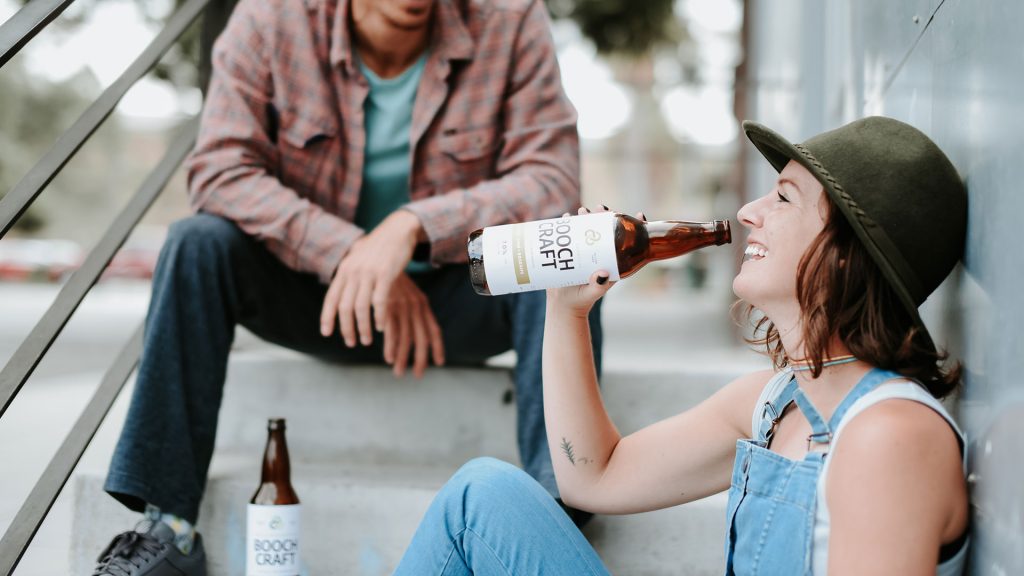 One major bummer for those suffering from Celiac disease is that they can’t drink traditional beer. That’s right, BEER! Don’t fret though, high-alcohol kombucha, like Boochcraft, is the perfect gluten free replacement to your previously favored fizzy alcoholic beverage and it is low calorie and packs a ton of health benefits. Boochcraft is 100% gluten free, no gluten is ever processed in the production facility.

What is Celiac Disease?

Celiac is an immune disease that causes people to not be able to consume gluten because it will damage their small intestine. Gluten is found in wheat, rye, and barley and it is in many different things most people eat each day. Gluten can also be found in other products like vitamins, supplements, hair and skin products, beauty products and even toothpastes.

When someone that has Celiac disease consumes gluten, they may experience a variety of different symptoms such as diarrhea, abdominal pain, irritability, depression, and some people don’t even present any symptoms. Celiac disease is genetic and doctors can diagnose the disease with a blood test.

Treatment for Celiac disease seems simple enough — a gluten-free diet… but did you know that many of our favorite things have gluten? (Like beer!) Yep, that’s right – people who suffer from Celiac disease should not drink regular (glutenous) beer, otherwise their symptoms will be aggravated and that can cause many long term health issues. Thankfully, Boochcraft is a great gluten free alternative. Especially for those who don’t have gluten free beer available to them locally. 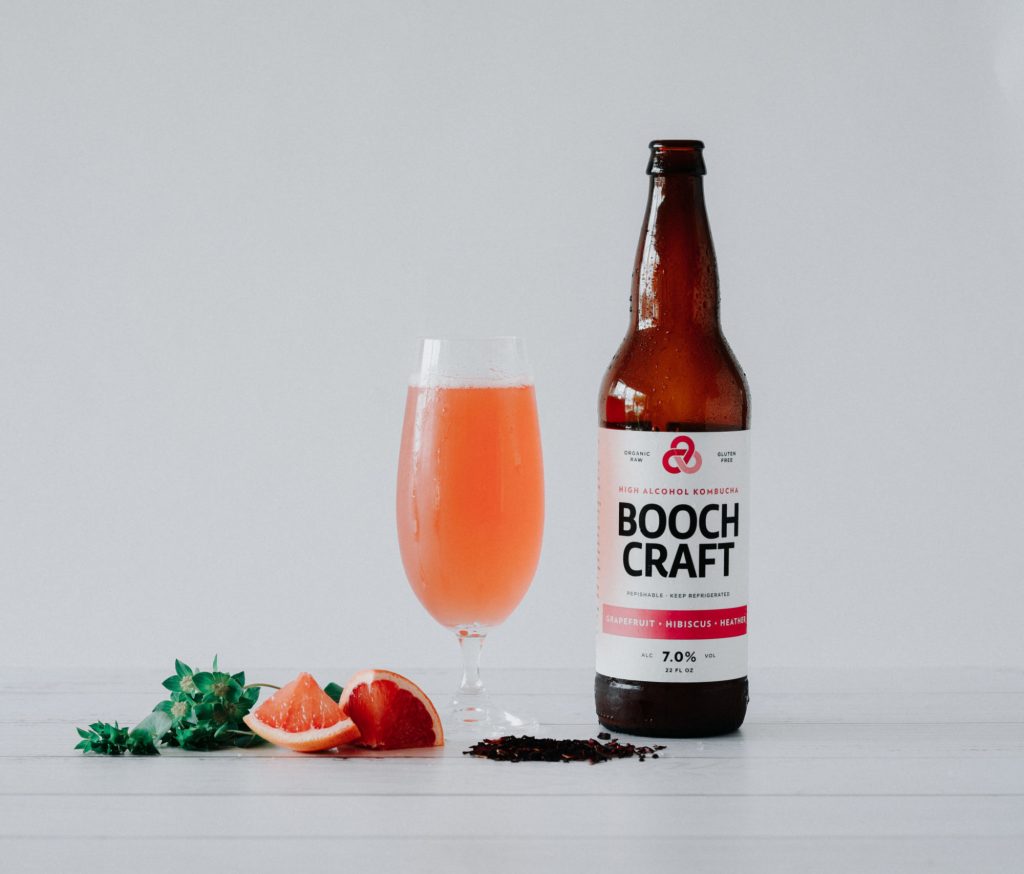 What is High-Alcohol Kombucha?

Kombucha is a fermented drink made with good bacteria and yeast mixed with sugar and tea. A SCOBY (symbiotic colony of bacteria and yeast) is used to turn the sugary mix into kombucha and it actually consumes most of the sugar, which leaves a low-calorie fizzy drink that is packed with amazing health benefits.

Boochcraft likes to take it up a notch by adding more sugar and a new strain of yeast after the initial fermentation is complete. After that, the mixture is locked in a closed fermentation tank to prevent aerobic bacteria from metabolizing the additional yeast into acids.

By fermenting the mixture for an extra 10-14 days, we are able to get the alcohol level up to 7% ABV, thus boozy booch was born. Learn more about how we make Boochcraft here.

What are the Benefits of Drinking Kombucha?

Kombucha has been around for thousands of years and is thought to have originated in China. It has incredible health benefits such as improving digestion, assisting the liver’s detoxification, providing joint and arthritis relief, and much more. Kombucha is packed with probiotics, antioxidants, organic acids, amino acids, active enzymes, and various vitamins.

Why is Kombucha good for Celiacs?

One of the biggest benefits of drinking kombucha is its incredible gut healing properties. Even when you follow a strict gluten free diet, Celiacs can still suffer from gas, leaky gut, and general discomfort due to inflammation and dysbiosis.

Anyone who suffers from Celiac disorder most likely struggles with digestive issues, and due to the SCOBY that is used to make kombucha, billions of probiotics are created. These probiotics help fight harmful yeast in your system while also promoting the creation of healthy bacteria in your gut. Not only is kombucha packed with health benefits, but Boochcraft also gives you a buzz due to its higher alcohol properties. Sounds like a win-win, right?!

We hope this article has given you some hope if you suffer from Celiac disease and have poor access to good beer. Hard Kombucha is a delicious, fizzy alternative that is low-calorie and packs tons of nutritious benefits. Boochcraft is a California based company that makes sustainable choices daily while never sacrificing quality. Drink up, friends! Your gut and taste buds will be so appreciative.

You can learn more about the variety of Boochcraft flavors currently available by visit their website.

TIP: You may even be able to order Boochcraft beverages online from this retailer!

*Disclaimer: Boochcraft does not provide medical advice. All health information is meant to be informational and educational and is not professional advice.